Artificial Intelligence is making giant strides and it begins to be perceived naturally also in the market of educational toys. If few months ago we talked about more or less static robots, and the discussion that ignited the most careful parents was about the amount of data that a voice assistant could steal from an unwitting child, well today we introduce you to Moxie; in addition to being the latest news in the field of AI for children, it is also proof that design serving artificial intelligence for kids can open new roads for interaction with robots.

At first glance this humanoid immediately carries me to two different worlds, actually in two famous animated films: ‘Wall-e‘ and its handyman robots and ‘Who framed Roger Rabbit‘, where humans and cartoons live together, with some difficulties but with precise rules. This association is certainly instinctive, dictated by aesthetic standards and information material on the web, but I wasn’t entirely wrong…

Some expressions of Moxie. Via embodied.com
Moxie was born from the sparkling minds of Paolo Pirjanian, co-founder of Embodied, and Yves Behar, one of the most interesting Californian designers of the moment, founder of fuseproject. The inventors, together with experts in child development and robotics, had the initial goal of building a companion for autistic children, to help them develop social and emotional skills. The design process then led them to think differently, imagining the robot as an ‘educator’ for children aged 6 to 9; We use this term not by chance, in fact Moxie is designed not only to interact with the child, but above all to teach him/her new things with content that it automatically downloads from the cloud. The lessons last about 35 minutes and deal with topics such as kindness, friendship, empathy; Through drawing, meditation exercises or reading, Moxie teaches the child new soft skills every week in a system that, in addition to avoiding too hasty ‘consumption’ of the contents, allows to adapt them to the feedback of the users involved. 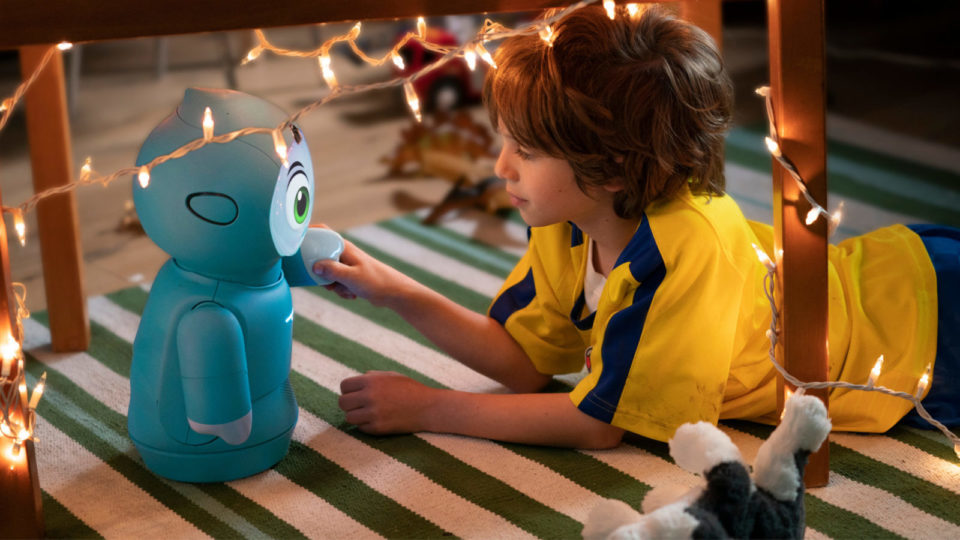 An interaction between Moxie and a child. Via fuseproject.com
The fluidity of this Artificial Intelligence is a very dear theme to Embodied which promises a qualitative leap in the interaction between the robot and the child; for this purpose, in addition to having developed its own machine learning software, the company took about three years to refine Moxie’s conversation, body language or facial expressions, also involving important partners such as the British Encyclopaedia or Merriam-Webster’s Dictionary for Children, to make the terminology used by the robot as natural and appropriate for a child (you can learn more about it here).
The role of design serving artificial intelligence for kids was fundamental to define the character of this small 40cm robot, and we don’t say it just because we are biased!!! Every detail is wisely reduced to the essence, from the body parts to the expressions of the digital interface; the drop-shaped head contains 4 microphones to allow the robot to turn in any direction it is called, and has two holes for the ears to listen to the secrets that the child will whisper to it. The curved screen is a distinctive element of the product, what makes Moxie an interesting novelty also on a formal level in the sector. The full-face display allows the robot to express itself as directly as possible, minimizing the possibility of misunderstanding through immediately clear facial expressions. Moreover, this includes a camera that tracks the child’s gaze allowing Moxie to maintain stable eye contact with its ‘pupil’. 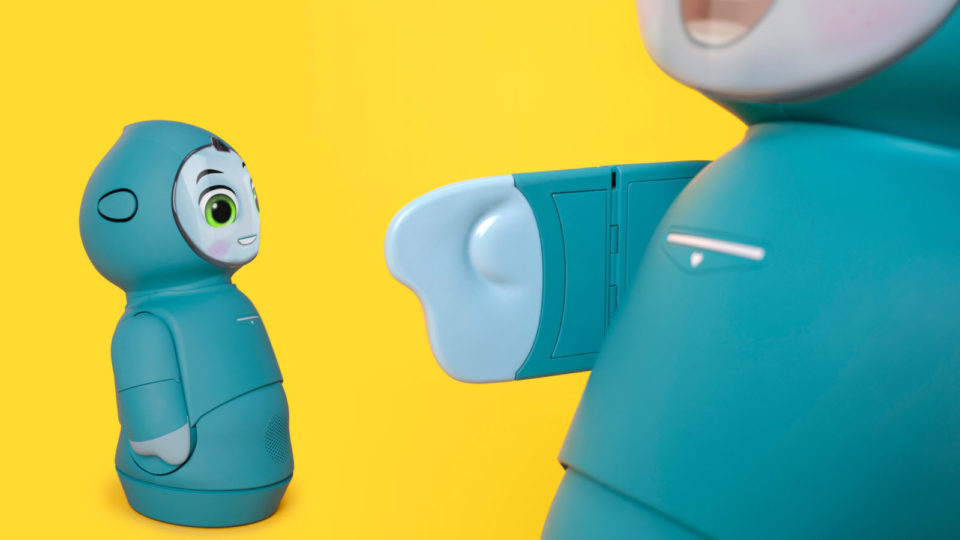 Particular attention in design has been paid to that of the hand; the form is simple but functional to Moxie’s activity and interaction with the child. Via fuseproject.com

Another interesting element of the project is the storytelling that goes with it; In a nutshell Moxie is the robot ambassador of the Global Robotics Laboratory, sent to earth to learn how to be a good friend for humans and the story develops through an ad hoc website where the child can connect Moxie and navigate between extra content, games and getting to know other characters…as I told you I wasn’t entirely wrong when I imagined this robot as a cartoon that lives with us humans!!! 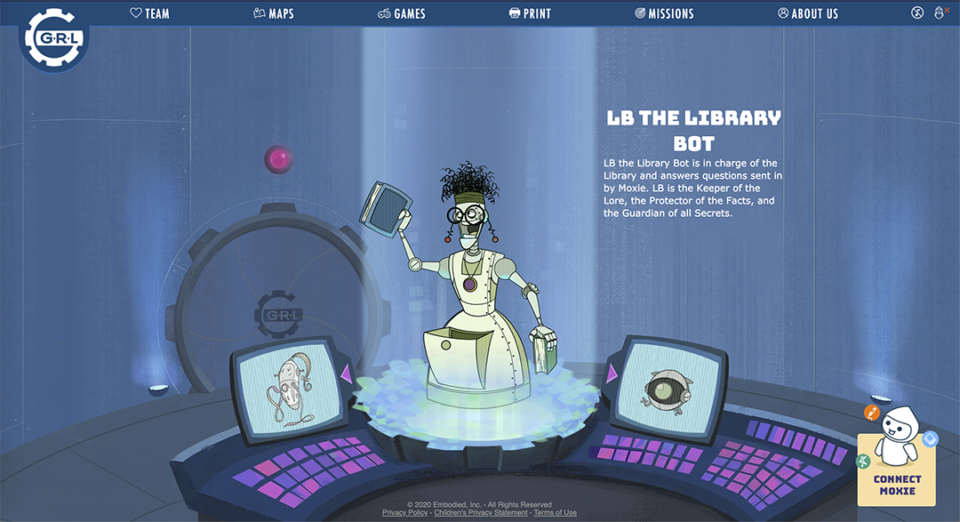 The home page of the ‘Global Robotics Laboratory’ site features all the characters related to Moxie
Concerns about privacy or technological overexposure are not lacking even in the case of Moxie but, at least regarding the latter, the inventors are keen to reassure parents: the robot is designed to converse no more than an hour with the child, passed this limit will need to rest and lessons will resume the next day. 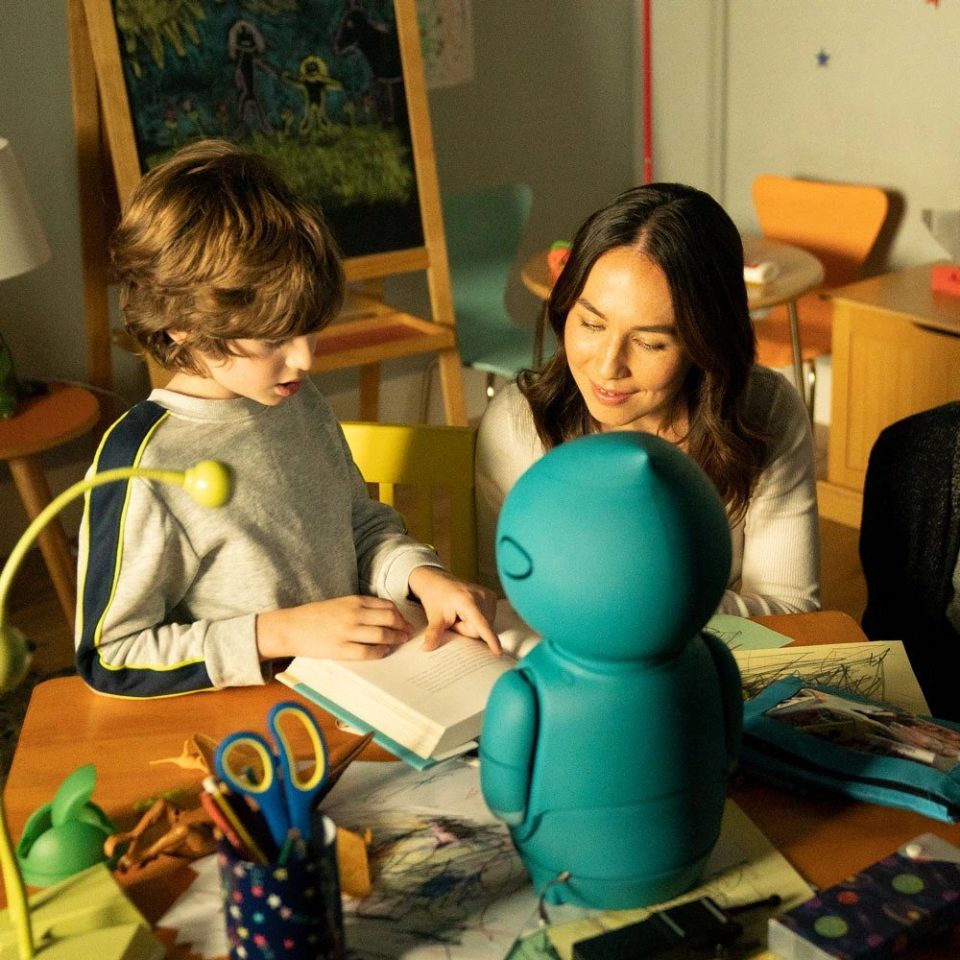 We will have to wait for the filnal release on the market to know the truth about this promising robot, but for now we can judge positively what we have seen and read. The design choices we highlighted in the article make the user experience and interaction with the robot almost human, and this makes Moxie gain many points compared to its competitors; probably this product had more ‘right’ timings than others, we are probably used to deal with voice assistants or Bots and Artificial Intelligence no longer seems a futuristic theme, but we can say that the design serving artificial intelligence for kids can take the value of a product to a higher level.

If you want to learn more or are curious to see how Moxie behaves, we recommend this video of a Live Demo Session with one of its creators.

[su_youtube url=”https://youtu.be/TND6L4_JCIM”]
Previous PostAN IMPORTANT INNOVATION FOR THE EDUCATION OF CHILDREN AND PARENTS
Next PostTOY DESIGN ACADEMY IS BORN