Only in Italy, people with diabetes type 1 (DT1) are about 300,000. This specific disease is also called juvenile or insulin-dependent diabetes because it usually occurs at a young age and is treated exclusively with insulin bites. The Mexican designer who designed an invention to help children with diabetes knows this issue really well.

Renata Souza Luque graduated in Product Design at Parsons School of Design, and she began designing THOMY after discovering that her 6-year-old cousin had been diagnosed with diabetes. Although it is a fairly extensive problem, the knowledge of this disease is not widespread. To design an invention to help children with diabetes the designer has set her research on the observation of the daily routine of her family member. In addition to observing an extremely controlled diet, a patient with DT1 must deal with 2 to 5 injections of insulin per day. This means always carrying a series of tools, almost never designed for the main user: the child.

Among the other critical issues identified Renata decided to focus on three fundamental elements:

From these elements began the design of an invention to help children with diabetes. 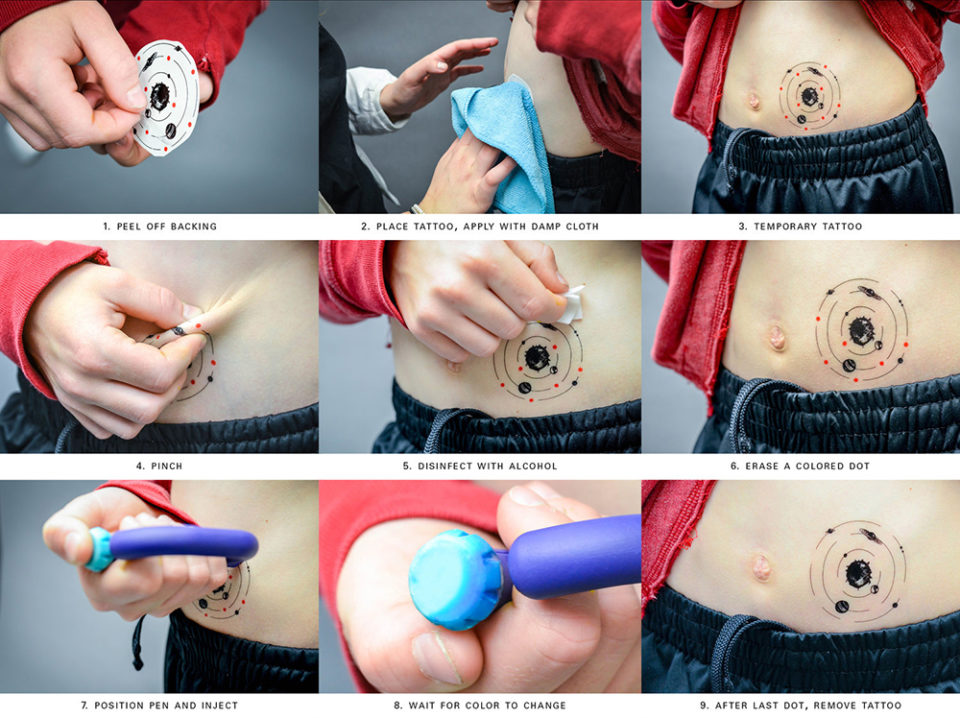 THOMY is a medical device for insulin injection. It consists of some tattoos that display the areas of bites and a syringe. The temporary tattoo has colored dots that the child removes one at a time with alcohol before each injection. When, after about three days, all the stains of color on the tattoo are deleted, the child removes the first tattoo and makes a second one in another point of the body. The ‘pen‘ to inject the insulin has a playful and appealing design, as well as being compatible with all the medical cartridges on the market. The handle is designed to support and facilitate the movements that the child performs to inject the drug into different parts of the body and the final part is made of thermoplastic which provides visual feedback to the patient when it is time to remove the needle.

The tattoo is a fundamental part of this project and it has been carefully designed. The designer has drew 3 different illustrations, choosing fun and captivating themes for the child, such as planets and rockets, fish or paper planes. The motivations of this choice are mainly related to the idea that the child should not perceive Thomy as a medical device, should not feel the weight of a cure to be carried and a ‘stigma’ on the skin. The tattoo must be something beautiful, to show proudly to their friends.

Last but not least element is the packaging of the set. ‘More than the shape of the case for this product, I focused on developing an emotional attachment to the product. I wanted it to be something that the children with the DT1 were proud to take with them and show without shame.’ These words of the inventor of THOMY summarize well the thought that should be the basis of a design for the medical. Especially when the users are the smallest, you have to set the research phase well and leave room for direct observation (we talked about this in this article), to design something really effective, like THOMY, that finds the right balance between a medical device and a toy.

DESIGNSOCIALTOY Blog LITTLE INVENTORS FOR HUGE IDEAS13 September 2019 — by Fabio Guaricci
Usiamo i cookie per assicurarti la migliore esperienza di navigazione sul nostro sito. Per continuare ad utilizzarlo accettare il loro utilizzo. - We use cookies to ensure that we give you the best experience on our website. Please accept to continue to use this site.OkRead more